Worldreader.org is experimenting with the notion that e-readers are libraries you can fit in your pocket. This organization is starting a new campaign that would deliver e-readers, like Barnes and Noble’s Nook and Amazon’s Kindle, to children in Ghanaian schools. The e-readers will serve as multi-purpose textbooks by providing instant access to the thousands of books now available digitally.

e-Readers require a high initial investment as well as Internet access. However, they take up very little space and do not require shipping and production costs that would make it expensive to send a library’s worth of reading materials to remote regions in third world countries. Assuming that the devices don’t break, it’s a brilliant way of ensuring that students can read the most recent editions and releases of books via digital storefronts.

Worldreader.org originally experimented in Barcelona, Spain, as well as last March at the OrphanAid African School in Ayenyah, Ghana. Amazon, in an effort to aid this study, had donated 20 Kindles and associated accessories, which included covers and power adapters. Since Internet connectivity was a problem, organizers pre-loaded textbooks and various reading materials to ensure that students could properly use these devices. A class of sixth graders then used them for their classes and education for a 10 day period.

Some Benefits of the e-Reader

Worldreader.org found that the students were quickly able to learn how to use the readers within hours of receiving them. Some advantages of using the readers included their ease-of-use compared to laptops, and that they are relatively devoid of distractions like open Internet, chat services, or Facebook.

The e-Reader is also great in that allows one to create bookmarks, highlight valid points, all on a lightweight 6″-10″ pad. People are beginning to realize the benefits of going paperless and saving trees, and that one doesn’t need to break ones back carrying books. In addition, overhead is relatively low.

Initial Launch of the e-Reader in Ghana Last November

Due to the success of the e-Reader’s initial trials, Worldreader.org launched a test case study last November in Ghana. This time around, it had reached more than 500 students from six different Ghanaian schools. The biggest eye opener was the quantity and diversity of books that the students downloaded. Among the thousands of books students downloaded included titles like “War and Peace,” “The Girl with the Dragon Tattoo,” and “ESPN: The Football Playbook” as well as magazine and paper subscriptions like The New York Times. One particular instructor downloaded 178 titles including works by Nietzsche, Shakespeare, and Socrates.

This is Nothing New 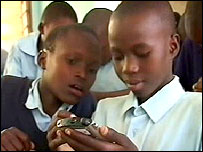 Interestingly, though, this is not the first time that new technology has been experimented with African students. 5 years ago, BBC News reported that in Kenya, handheld computers called e-Slates were distributed by a company called Eduvision, also for the purposes of spreading reading materials for a country where regular books are a scarce commodity.

About the Author: irise